Skip to content
We may earn an affiliate commission when you buy through links on our site.

As the years have gone by, a lot of us have realized that when it comes to getting rid of bugs and pests, pesticides and zappers are becoming less effective.

The insects are mutating to resist these chemicals, and they have grown stronger to the point where they are absolutely unaffected by many types of repellents.

And as the population of mosquitoes and other vector or pathogen carrying bugs are on the rise, the need for a new and improved bug killing device has never been so desired.

Hello! I am Heather, and when it comes to my family’s safety, I seldom leave any stones unturned. And that is precisely why I have brought my readers a review on a bug catcher that uses a particular mechanism to trap and kill insects.

The DynaTrap is as unique as it is effective against bugs, and today I would like to tell you about all of its features that makes it a must-have for your backyard.

Dyna Mosquito Trap Reviews Feb 2023: What makes it so unique? 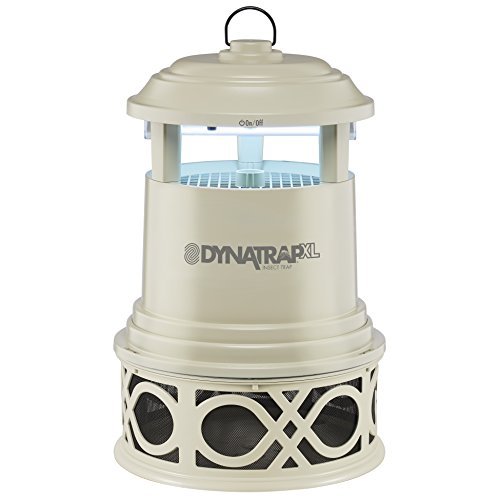 Where most of the bug killing devices depend on insect zapping mechanism to function, the DynaTrap, on the other hand, primarily works towards trapping the bugs.

This is an unusual mechanism, and depending on the DynaTrap model, you’ll be able to protect your family from 300 sq ft. up to an acre of property without the aid of any harmful pesticides.

With DynaTrap installed, enjoying backyard activities such as barbecues and ring toss games will never feel so free of bugs and mosquitoes.

DynaTrap works much better than bug spray and tiki torches as well. Tiki torches or any other similar bug repellent devices use citronella oil, which only keeps the bugs away and not kill them. This can be quite harmful to your family in the long run.

I used to be a very big fan of tiki lanterns in the backyard, especially when it came to repelling bugs and giving my kids a safer playtime. However, continually refueling them every now and then became increasingly cumbersome, and I soon needed a convenient alternative.

I heard about the DynaTrap online, and after going through some of its reviews, I decided to give it a try myself.

Why is there a constant need for better anti-bug devices?

The fact that more and more harmful diseases are on the rise is not a new story. And along with the older pathogens, newer ones such as the Zika virus has recently emerged, which too spreads from vector to vector.

The Zika virus causes mild symptoms in adults but can cause severe deformities in babies. And according to some of the news outlets it has of late been spreading throughout Texas, Arizona, and California.

West Nile virus is another one that has spread in California, and it causes symptoms such as fever and brain infections. It can then lead to permanent memory loss and neurological problems in children.

As a mother of two, I always worry about how to keep my kids safe from such viruses and vectors. Pesticides and bug sprays used to work wonders, but as time went by all these carriers have grown quite resistant to them. And the viruses too have evolved to such an extent that the previous antibiotics do not work on them anymore.

In the suburban town that I live, mosquitoes are by far the biggest threat to my family. They spread diseases like Malaria, Dengue, Yellow Fever and Encephalitis, which can be quite deadly in their most virulent forms.

Besides eliminating the breeding ground for mosquitoes such as pools of water, fallen leaf piles and cracks in home exteriors, homeowners need to invest in a proper bug trap as well. And this is where the DynaTrap comes in.

Specific bug solutions like pesticides and pest strips can be very effective against mosquitoes, but they can also have harmful effects on humans. So, I would suggest that you go for pesticides as a last-ditch measure when all else fails.

Is the DynaTrap better than a bug zapper?

The trap comes with a 10-foot long power cord and can be effectively left “on” all the time. Just plug it in and forget about it. And unlike the standard insect zappers, I found the DynaTrap to be absolutely noiseless, and it did not keep my kids awake at night while functioning.

Bug zappers have a terrible reputation when it comes to dealing with mosquitoes. As mosquitoes are not attracted to UV lights, they hardly ever approach the zapper, making them useless in dealing with the pathogen-carrying vector mosquitoes.

I learned that the female Anopheles mosquitoes are some of the biggest disease carriers, and when searching for blood, they find it by following the scent of carbon dioxide.

They are also attracted by certain other factors like sweat, perfume and body odor, but carbon dioxide is the major one. DynaTrap uses carbon dioxide to attract and trap these mosquitoes.

Its retaining cage is very easy to remove and clean, and for those who live in a bug infested area, DynaTrap also offers a large-capacity net as an additional upgrade. 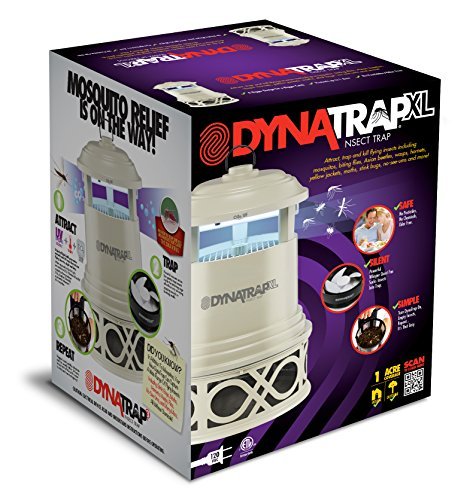 The DynaTrap has a 2-in-1 function where it uses both ultraviolet light and carbon dioxide to trap and kill all sorts of bugs and pests.

While the UV light works towards attracting insects such as flies and gnats, the specially coated disc, on the other hand, produces carbon dioxide to attract mosquitoes and other biting insects. Additionally, DynaTrap also catches bees and stinging insects in the daytime.

After attracting all these bugs when they get close to the machine, the DynaTrap unit sucks them up into the trap. The suction fan is amazingly silent, and as there is no zapping done, the machine doesn’t produce any burning smell.

The retainer is see-through, and you will be easily able to identify when you need to empty the trap.

As the DynaTrap has a very lightweight and compact design, you will be able to set it up anywhere in the backyard, but always remember to place it at least 3 feet off the ground.

Moreover, unlike its other propane bug trap competitors, the DynaTrap is not as expensive and is incredibly easy to maintain. Propane traps need to be continually re-filled as the machine runs out of fuel very fast and that stacks up on the expenses in the long run.

Their tank size is typically that of a large gas grill, and for the propane trap to work optimally, you will be needing a replacement attractant which is not at all cheap.

Another amazing aspect of the DynaTrap is that you will be able to use them indoor as well, which is not the case for many zapper models and propane trappers.

Its compact and portable design makes it effortless to take apart and then reassemble.

In terms of maintenance, all you have to do is clean the fan, and if the bulb goes out, replacing it involves just one screw. The tram is surprisingly durable and can withstand almost any season conditions, especially the monsoon.

What are some of the cons of DynaTrap? 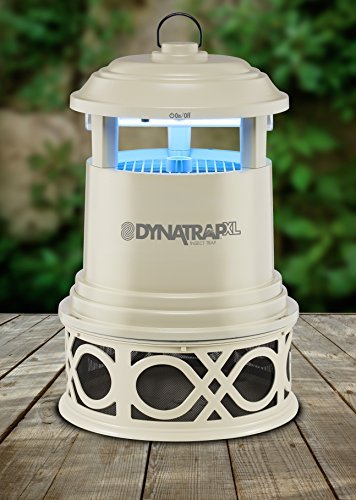 Most of the drawbacks concerning the DynaTrap have to do with minor inconveniences that can be worked around rather than being major problems and issues.

One of the most popular concerns among customers is that the DynaTrap traps every bug. It doesn’t segregate between what it should trap and what it shouldn’t, hence there might be cases when it can accidentally suck in beneficial insects.

Moreover, as the trap doesn’t instantly kill the bugs, but rather starves and dehydrates them to death, there may be chances that some of them are still alive when you remove the retaining cage to clean it.

Solution: A way around this is to partially cover the trap with a plastic bag, and then blast the insides with hot air with the help of a blow dryer. Though it might seem like a lot of work at first, which even I thought was the case, I got used to it rather quickly.

Another alternative would be to buy an extra retaining cage. So, when the time comes to clean the one in use, you can remove it from the trap by covering its mouth and then insert the new one in. This way you can just wait out for the bugs to die rather than holding a blow dryer for a long time.

For specific backyard designs and structures, the extension cord of the Dynatrap may not be long enough. Placing it far away from the house is not possible, and there may be issues with the device covering the whole yard if it’s too big.

Though the DynaTrap can operate really well in the rain, its retainer, on the other hand, can collect water very quickly. And this collected water can act as a breeding ground for mosquitoes and other insects.

Solution: You can either try and hang the DynaTrap under sheltered areas or get a DynaTrap model that has a built-in-moat. So when the moat fills out with water and mosquitoes, try to use it as a standing water nest, and the fan on the trap will automatically suck them into the retaining cage.

Moreover, some customers have felt that the attraction level of carbon dioxide emission is not all that great. Well, DynaTrap allows extra attractant addition slots to improve the effectiveness of the trap.

The device should work admirably as long as the attractant has octenol in it. And if you’re worried that the trap will suck in larger non-mosquito insects because of the extra attractant, you can always cover the opening with a mesh.

But when removing the trap, try and make sure that the UV lighting is protected from any sort of moisture, as the light is the part that is always the first to get damaged.

Doesn’t have a satisfying zap sound

This is more of a personal preference than a problem, really. Some of the customers in the product forums have complained that they miss the zap and sizzle like sound effect of an insect getting stuck into the zapper.

As the zappers have been an integral part of the suburban household for many years now, hearing the insects sizzle have been a source of great comfort for many.

But for me, it was a great convenience that the DynaTrap hardly makes any noise, and as zappers don’t affect mosquito in the slightest, the DynaTrap was an all-around win-win investment for me. 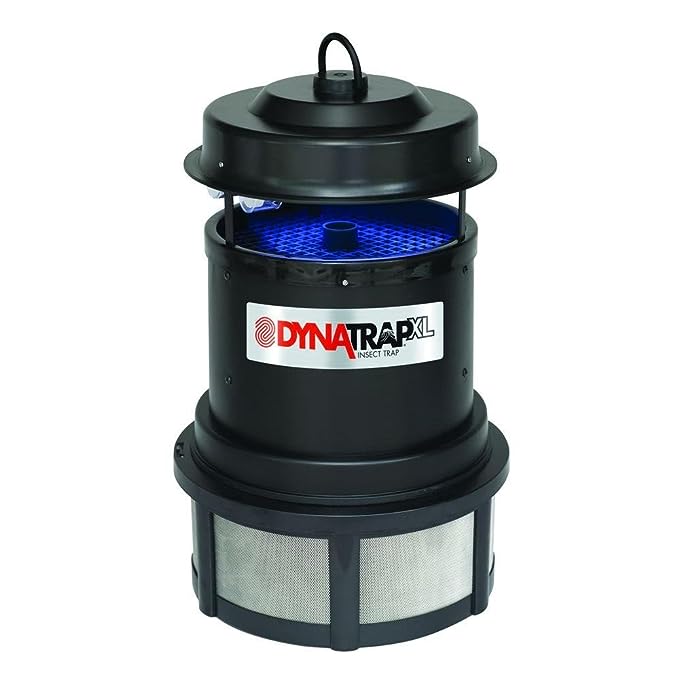 The DynaTrap has a wide range of models which mainly differ in size. The bigger the device, the higher the attraction level and trapping potential.

Each of the designs comes with a one-year limited warranty. The parts of the DynaTrap are easily detachable and replaceable.

From their store and website, you can also purchase replacement fans, retaining cages and motors, or even try and trade up to a large-capacity net.

However, keep in mind that as there are a lot of DynaTrap models, the parts will vary with each device as well. So, when replacing a part, be aware of the model that you possess.

To kill a lot of bugs at one go, a lot of homeowners today are demanding a product that is as hassle-free as possible. As zapping and scented torches are no longer an optimal choice, the DynaTrap has grown significantly in popularity ever since.

Its working foundations are purely based on scientific findings, and honestly speaking, it’s really hard to argue with that.

I hope you found my review on DynaTrap useful today.